How to Write a Government Contract Proposal

In business, a government contract proposal, generally known as a government proposal is a contract that is produced as a response to the requirements of the government that are issued in writing by a government entity for purchase of specific goods or services. Generally all the government areas including national, provincial/state and local issue requirements in the writing form to reduce cost and making the process fair, whenever they want to make a purchase of goods or services. Outside the circles of business, a government proposal is generally is meant to be a legislative or in words it is said to be a legislative motion. There are a lot of approving authorities involved in a governmental proposal process because of the procedures.

Through the government contract proposal, governments request for competitive proposals for contract when they are of the opinion that there are many other issues involved other than the initial cost of purchasing the required services or goods. These other issues considered by the government include risk, schedule, quality, long term cost etc. Risk is about the ability of the required good or service to meet the government needs, schedule means the delivery of the product or service in given time, quality means the consistency of product or service delivered each time and long term cost addresses the total cost of a service or product spread over its lifetime. Mostly governments use these contract proposals in the purchase of such services and goods that are not of routine use. After proper assessment and analysis of received proposal, the best suitable proposal is approved for further process. 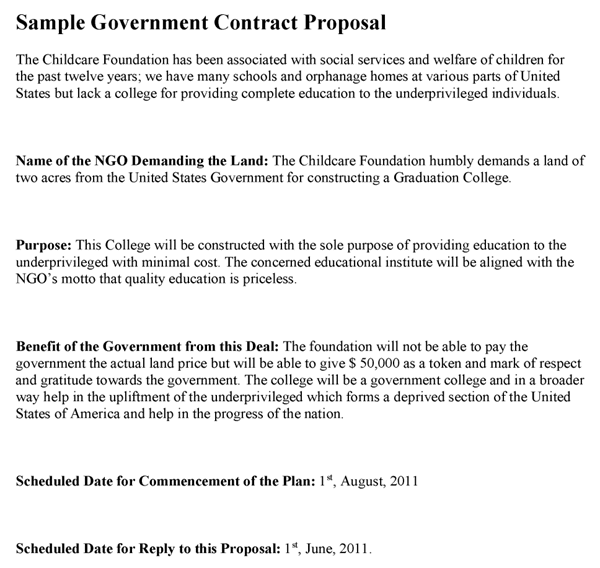