As there are a number of employment proposals written by prospective candidates for seeking employment in different profitable companies. Similarly, prospective candidates who wish to work for a nonprofit organization or an NGO need to write and submit an employment proposal, this proposal is known as an NGO employment proposal. This proposal is prepared by the candidate interested to work for an NGO and is presented to the said NGO with the aim to join as a leader or an agent. Keeping in mind the nature of the work that it is an organization that is focused on working for righteous and noble values, the candidate not only depend on his academic qualifications because it is not enough to convince the concerned authorities but also emphasize on personal attributes to show himself a dedicated, upright and a well wisher character as well. This proposal should be written with a careful and dedicated approach conveying your feelings and the thirst to work for well being of the humanity.

An NGO employment proposal contains the information about the candidate i.e. the name, age, qualification etc. The date of the presentation of proposal should also be mentioned at the top of the proposal. The objective of the proposal should be clearly written that you want to work for a welfare cause for example for basic rights of children. You need to mention your welfare projects that you carried out and need to share your previous experience of working in a similar role. By including all these details, you can make your employment proposal a sound r obtaining the employment in an NGO. 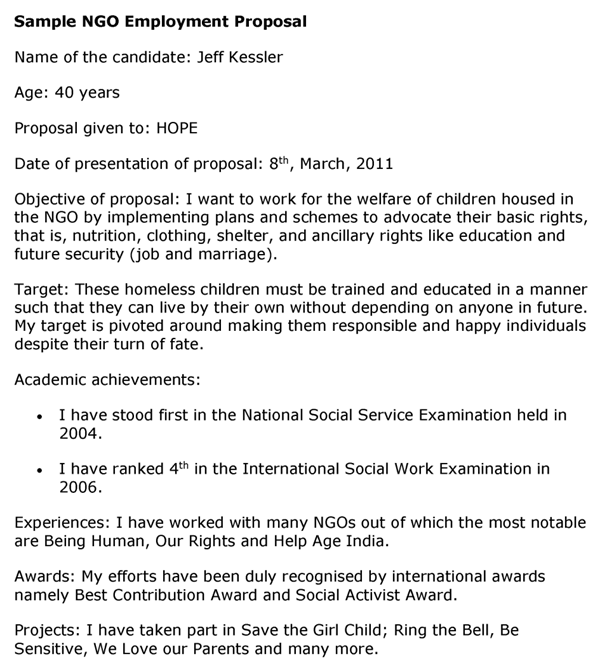